One of the things we love about makeup is that it’s always changing but it keeps the same thread running through it: fun, beauty, expression and color. We love to look back at past decades and pore over the makeup looks which dominated the time. The hazy, bronzey, shimmery vibes of the 1970s, the severe brows of the 1920s, the sexiness of the 1990s. But lately, we’ve been really into the 1960s.

There’s something so unashamedly cool about 1960s style. To us, it seems like a style based around fun, experimentation, color, light, shade, and proportion. Take a look at a few 1960s makeup icons such as Twiggy, Edie Sedgwick, The Supremes, Cher, Brigitte Bardot, and Marsha Hunt so you can get into the creative mindset before we look at how to get the look and how to modernize it!

The face was reasonably flawless, matte (but on the natural side and turning more dewy toward the 1970s). A little peachy, apricot or pink blush was used. The blush was often used to warm the temples as well as the cheeks. In photos of Jean Shrimpton, you can see the slight shadow of subtle cheek and jaw contour. A translucent powder was then used to set everything down and gently mattify the look. Make it modern: use a BB cream or light foundation with concealer to even the skin. Dab a cream blush onto the apples and temples, and blend a cream highlight onto the cheekbones, nose, above the brows and on the edge of the top lip. Dust the face with a translucent powder to set.

The brows were shaped and maintained but by no means thin. In fact, they followed on from the bold brows of the 1950s. They were penciled in, defined and brushed.

Make it modern: keep the eyes gently shaped (only remove hairs from below the brow, never above) and put the stencils and extreme brows away! Stick with your natural brow shape and just give it a hand with a powder or tinted gel.

The eyes were THE feature of 1960s fashion makeup. Lid colors were mostly cool-toned and opaque, such as minty green, snowy white, grey or pale blue. The severe cut crease drawn on with black liner or shadow opened the eyes and created the “mod” look, often with lower lashes drawn on under the eye with black pencil or gel. Thick, heavy fake lashes were used to finish the look. The lash line was lined with black eyeliner and winged at the outer corner. The most crucial aspect of the look was the contrast between the lid and the crease: a deep, defined crease line set against an opaque, pale or cool-toned lid. 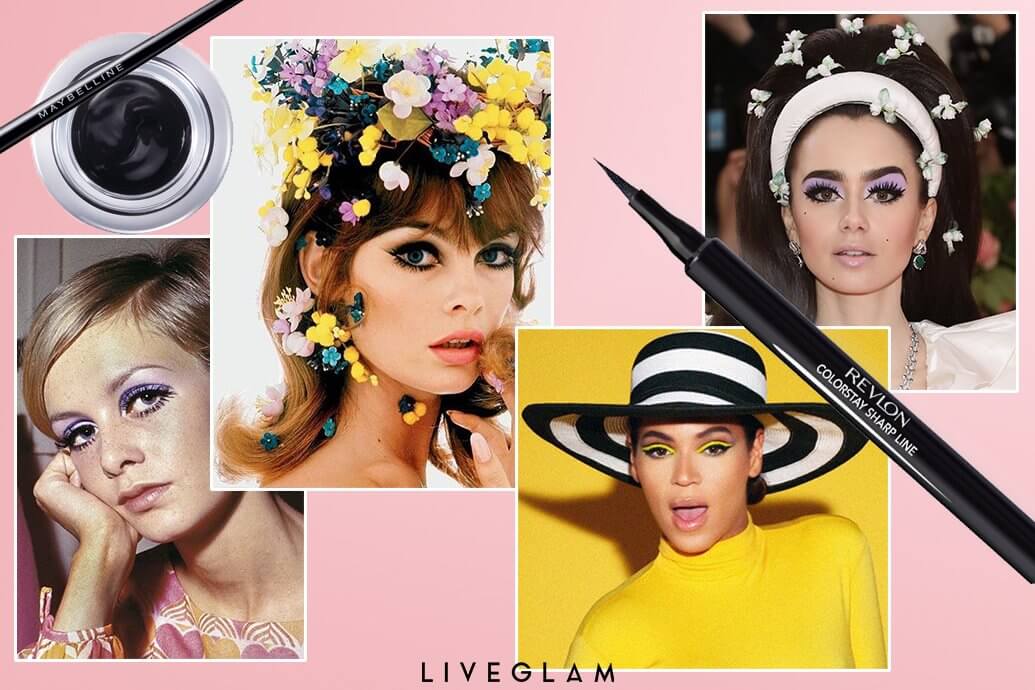 Make it modern: keep it exactly as it was back then (why not?!). Or, use a charcoal-grey shadow and blend a bold line into your crease. Pack cool shadow onto the lid, line the lash line with a thin gel liner and add lots of mascara. Pop a highlight onto the brow bone and inner corner but keep the lid and crease colors matte.

The lips swung on a scale from super pale, milky and nude-pink, to slightly more shiny corals, reds and pinks. Satin-finish, pinky-nude formulas were also used.

Make it modern: slick a pinky gloss, like our LiveGlam KissMe lippie in Fiancée, over a nude liner or dab a color into the lips to enhance the natural color without making the lips a feature. A shimmery, sheer lipstick in a natural, lip-matching shade also looks stunning against a bold 1960s eye. Or simply go for a tinted balm. Now you must throw a 1960’s themed party so you have an excuse to show off the look and get your friends to attempt it too!

Gin is a beauty enthusiast with a passion for makeup she's had since kindergarten when she would raid her Mum's makeup drawer. When she's not playing with new products and writing about makeup, she's a theatre actress, director and producer.